Whether you are a music major or non-music major, you may be interested in performing in one of our many ensembles. These ensembles cover a range of instruments and styles, ranging from choir to the FAMU Marching 100 band.

The Florida A&M University Flute Choir was established in 1974 under the director of Dr. Julian E. White.  The ensemble has grown from six members to the present thirty, with full instrumentation to include piccolo, E-flat flute, alto flute and bass flute in addition to the rhythm section consisting of piano, drum set and bass.

The ensemble is in high demand, performing for university programs, banquets and conventions in addition to numerous performances throughout the community and the state of Florida.  The flute choir also did two performances in Nassau, Bahamas.

The present director, Mrs. Dennine M. White, has served in this capacity for the past ten years.  Mrs. White is a graduate of Florida A&M University earning a Bachelor of Science Degree in Music Education.  She received the Mast of Music Degree in Flute Performance from the University of Akron.  Further study was done at Florida State University.

Mrs. White is very active as a recitalist and soloist, having served as soloist with several military and university bands. 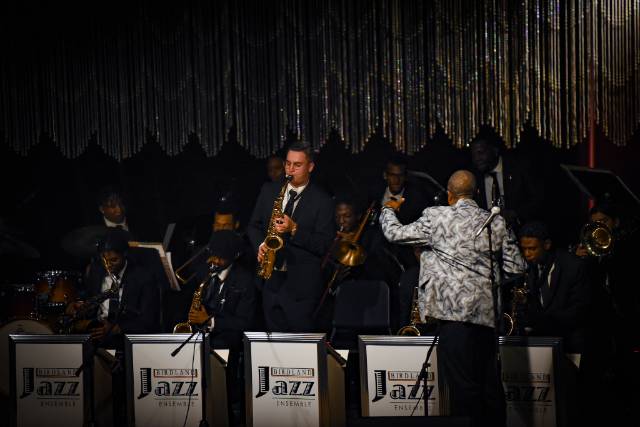 Most recently, the Jazz Ensemble performed at the Crescent City Jazz Festival in New Orleans, Louisiana where students received outstanding soloist awards in each section.  The Florida A&M University Jazz Ensemble was also featured as the headline performer at the 19th Annual Melton Mustafa Jazz Festival in Miami, Florida.  In addition, many former members of the FAMU Jazz Ensemble have developed successful careers as performers, recording artists, educators and band leaders. 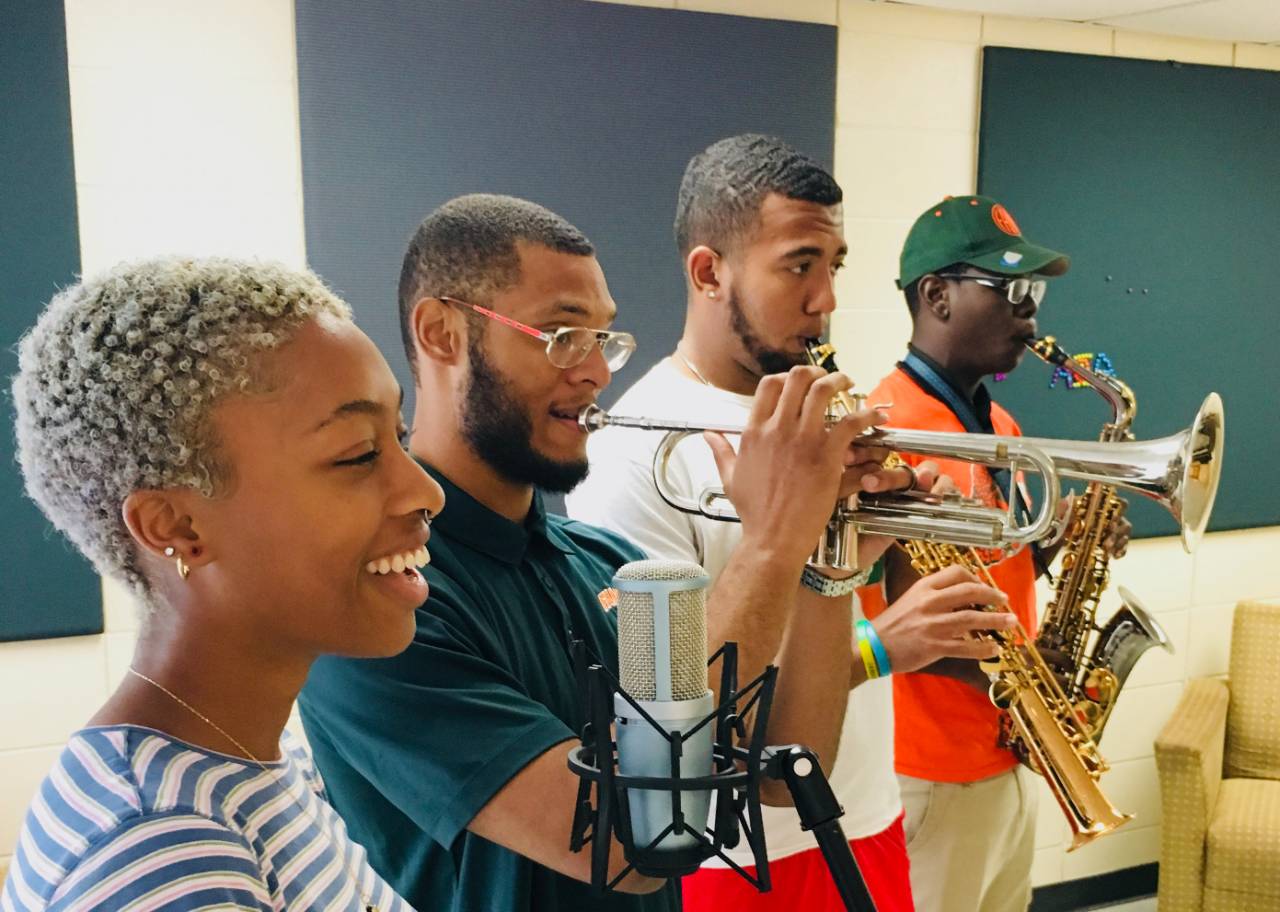 The Award-winning FAMU Latin Jazz Ensemble is a unique cross section of all of the music divisions, with an opportunity for instrumentalist and singers to join forces in a unique ensemble that allows for maximum creativity, as well as explore unique and exciting new repertoire in a multi-cultural setting.

Students will get instruction in ensemble playing, arranging and recording as well as learn about Latin rhythms and repertoire from the Carribean and South America.

The main goal of the Latin Jazz Ensemble is to create musical opportunities that will expand the students's sense of the globalization of music as well as emphasize the humanity we share through cultural differences.

Born in Warsaw, Poland, Dr. Sobkowska has served on the faculties of Universidad del Cauca in Popayan, Colombia and Universidad del Valle, Cali, Colombia. She taught piano and performed extensively as a soloist and chamber musician with the Orquesta Sinfonica del Valle and various ensembles for the chamber music concert series, and as a harpsichordist for the early music ensemble Conjunto Dolmetch.  She has also participated in the International Summer Courses in Zurich, Switzerland.

Her piano repertoire includes masterworks of the Classic and Romantic eras (Beethoven, Schubert, Schumann, Chopin among others), as well as numerous works from the twentieth century repertoire (Ravel, Poulenc, Prokofiev, and many contemporary composers).

As a chamber music pianist and accompanist she has appeared with many  prominent musicians in a broad repertoire ranging from Baroque music to the premiers of new compositions.

As a soloist and chamber musician, Dr. Sobkowska has performed on the concert series of the Warsaw Philharmonic, Poland, at the Festival Internacional del Piano in Bucaramanga, Colombia, the Piccolo Spoleto Festival in Charleston, SC, the FSU Festival of New Music in Tallahassee, Florida, and CASMI International Summer Program in Prague, Czech Republic. She also was the solo pianist for a CD recording of Ladislav Kubik’s Concerto Breve for piano and orchestra with the Prague Radio Symphony Orchestra and the Triptych on texts by Franz Kafka for the Col Legno-Qualiton label.

Dr. Sobkowska recently premiered and recorded for the Col Legno-Qualiton label Ladislav Kubik’s Sonata for Trombone and Piano with trombonist Jay Evans.  As soloist on the Grieg Piano Concerto she performed with the Big Bend Community Orchestra of Tallahassee, Florida.  She is currently half of the Parsons-Sobkowska duo with trumpeter Longineu Parsons and their current CD release is entitled “Sometimes We Feel”.

LONGINEU PARSONS has been hailed by critics internationally as being one of the world’s finest trumpet players.  He also performs on recorders, flute, percussion and is a vocalist.  Longineu performs classical and jazz on trumpet and his compositions include orchestral works and chamber music as well as jazz and world music.  He is the protégé of the great cornetist, Nat Adderley.

Longineu has performed in some thirty countries in North, South and Central America, Europe, Asia, the Middle East and Africa.  He has performed for such dignitaries as the King of Morocco, the President of Gabon, the Royal Family of the Netherlands, the President of Austria, the U.S. Ambassador to France, The Royal Family of Monaco and for UNESCO.

Longineu holds a BS degree in Music from Florida A&M University and Master of Music in classical trumpet from the University of Florida.  He has also had supplementary jazz studies at the Berklee College of Music in Boston and has extensive studies in composition on the master’s and doctoral levels.

The FAMU Percussion Ensemble is presently under the direction of Dr. Shaylor L. James. Since Dr. James assumed leadership, the ensemble has received national acclaim and recognition as one of the outstanding collegiate ensembles in the country. The ensemble has appeared on national CBS television, performed for the United Nations General Assembly along with numerous appearances at universities and clinics throughout the southeast. Aside from the many professional performances by the ensemble, they are in constant demand for educational lecture/concert.

In addition to playing the standard literature for percussion ensembles, the FAMU Percussion Ensemble has premiered thirty-eight new works for brass, strings and percussion. Many of their performances are of student compositions. The ensemble takes pride in its unique feature of such diverse media as jazz/rock, vocal/percussion, percussion/dance choreography, chamber works, along with many compositions employing the use of the human body to produce musical sounds.

The Florida A&M University Symphonic Band Wind Ensemble is composed of ninety musicians from six hundred fifty musicians in the University Band Program.  Both organization are recognized nationally for their outstanding music accomplishments, as well as the outstanding musicianship, beautiful sonority and resonance of ensemble tone, blend and balance, interpretation and expression that is achieved.

The Florida A&M University Symphonic Band presented a concert for the Convention of the American Bandmasters Association held in Sarasota, Florida at the Van Wezel Performing Arts Hall.  The band has also made appearances at the American Bandmasters Association’s 55th National Convention at Florida State University and the National Black Music Caucus Professional Conference in Atlanta, Georgia.