Dr. Shelby R. Chipman is the Director of Bands and professor of music at Florida A&M University (FAMU) 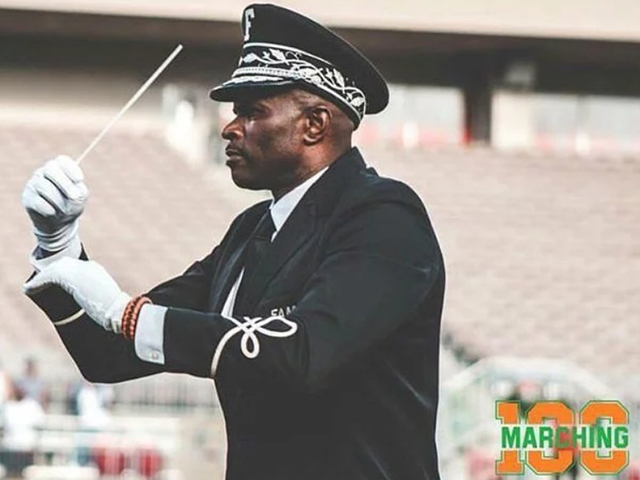 Dr. Shelby Chipman, Director of Bands
Dr. Shelby R. Chipman is the Director of Bands and professor of music at Florida A&M University (FAMU). His responsibilities in the Department of Music include teaching Instrumental Music Education, conducting, and assisting with student recitals and student teachers. Additionally, he conducts the Marching & Pep Bands, Wind Symphony, Symphonic Band, and String Ensemble. He is a native of Miami, where he graduated from Miami Northwestern Senior High.

He received his Bachelor of Science degrees in Computer Science and Music Education from Florida A&M University, where he was conducting student of Dr. William P. Foster and Dr. Julian E. White. Professor Chipman completed his master’s degree in music education at the University of Illinois, and received his Ph.D. in music education from the Florida State University (FSU) College of Music, where he studied with Dr. Bentley Shellahamer.

Prior to his appointment at FAMU, he taught music in the Miami-Dade County Public School system for 10 years. His band program at Miami Central High School developed into one of the finest band programs in the country. As much as a teacher as he was a musician, Dr. Chipman was named Teacher of the Year during the 1993-94 school year. Under his leadership the Rocket Marching band performed in the 1993, 1995, and 1997 King Orange Jamboree Parades, 1993 Heritage Festival (New Orleans), 1990-96 FAMU’s Homecoming Festivals (Tallahassee, Fla.), 1992-97 MLK Parades & Festival (St. Petersburg, Fla.), 1997 Macy’s Day Parade (New York City), and numerous other marching events. The Miami Central High School Symphonic Band performed at the prestigious Bands of America National Concert Festival in Indianapolis, IN. The Florida A&M University Wind has recently performed at the Florida Music Education Conference, as well as at the prestigious Carnegie Hall in New York City. The Florida A&M University Marching Band is continuing its strong legacy of performance in celebrating 70 years of excellence since June 1, 1946.

He has coordinated numerous band festivals and had the pleasure of working with James Croft, Timothy Reynish, James Suddith, Jim Sparks, Gary Green, Anthony Maiello, and Eugene Corporon, who represent some of the finest conductors in the world. In addition to working with these outstanding conductors, Dr. Chipman has presented music education and conducting clinics on several public school and college campuses, as well as given lectures at the FMEA conference and Mid-West Band & Orchestra Clinic in Chicago.

He is an active adjudicator and clinician throughout the Southeastern United States and currently serves as music director/conductor of the Tallahassee Big Bend Community Orchestra, as well as the Florida collegiate advisor, and the Southern Division for the National Association for Music Education (NAfME). Dr. Chipman is married to Detrick LaShawn and together they have one son, Israel Armenian Chipman.

As an educator, Dr. Chipman believes that all students can learn. He believes there are obstacles that create barriers, but through faith, guidance, and love anything can be accomplished.